Atanua is a real-time logic simulator designed for educational use. It has an intuitive, OpenGL accelerated user interface, with which the user can place components and wires. Components include all common logic blocks, including gates, latches and flipflops. Additionally Atanua simulates about 30 different 74-series chips, as well as an 8051 microcontroller variant. Simulated and pure logic parts can be mixed in the same circuit. On the I/O front, Atanua includes several different frequency clock inputs, constant level inputs as well as buttons that are bound to the user's keyboard. LEDs in various colors as well as 7-segment displays are also included. There is also a simple logic probe for debugging. The simulated parts are designed to resemble their real-world counterparts, which is more attractive for the students than pure schematics. The students can practice lab experiments using the simulated chips. The simulation shows the signal state of each wire in real time. In addition to high and low signal level, parts may output "invalid" signal, stating that there is a problem with the circuit, such as outputs connected together, or missing wirings from some chip. Additional parts can be made using the plug-in interface. As an example plug-in, a driver for the Velleman K8055 USB experiment board is provided, with which the user can mix simulated and real-world components. An anti-cheating tool is also available for teachers who wish to use Atanua for homework. 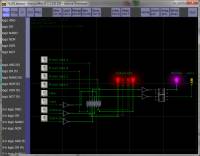 How to Map a Network Drive in Windows 10 1.1
In this e-book i explain in details step by step how to map network drive in wid
Freeware
tags: read more here