The primary focus of Raize Components 6 is on the new VCL capabilities that have been added to Embarcadero RAD Studio. Specifically, 64-bit VCL support and the really cool new VCL Styles support. Unlike other releases of RAD Studio which simply required recompiling the existing code base to provide a new set of DCUs and packages, there were a lot of low-level changes made to the VCL. For example, many controls migrated smoothly to 64-bit, but many others required low-level modifications. In addition, every control in Raize Components was affected by the new VCL Styles. Each control's display code needed to be significantly modified to fully support for VCL Styles when they are available. It has been a lot of work, but we are certain that you will find the end result really cool!

There are other enhancements and fixes included in Raize Components 6, but 64-bit and VCL Styles support are the major new features. Raize Components 6 definitely leverages RAD Studio, and to get the most out of RC6, you need RAD Studio XE2 or later. 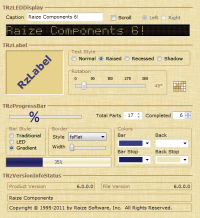