aTunes is a full-featured audio player and manager, developed in Java programming language, so it can be executed on different platforms: Windows, Linux and Unix-like systems, ...

This version comes with a set of improvements and new features, most importante are these:

* New storage system for repository data, which allows a faster startup of application
* Separate text fields for search in navigator or play lists to make filtering easier
* Better integration with Mac OS X, including tray icons as in other operating systems
* New format to save play lists using relative paths, so they can be shared across several computers with aTunes
* Support for read and write song ratings to tags

* Allows users to view music categorized by artist, album or genre in a hierarchy tree, or by folders
* Fast access to songs and albums
* Filter option to find easily artists, albums or genres
* Cover Navigator

* Support for huge playlist, with thousand of songs
* Support for multiple playlists at the same time
* Shows multiple columns: title, artist, album, genre, length, track number…
* Can be sorted by any of the columns
* Columns can be hidden for simplicity
* Support for open or save m3u playlists
* Full Drag-and-Drop support. Songs can be dragged from the navigator or from the OS file system
* Can be filtered

* Standard view with all controls and features
* Multi window view. Every window element (navigator, playlist, context information) is shown as a separate window. Every window can be located and / or arranged as you want.
* System tray icon to control player
* Themes support: you can change aTunes colors by changing theme
* Full Screen 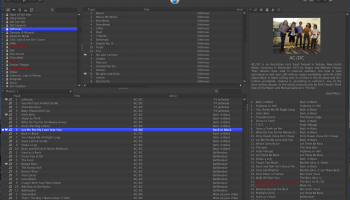