BonkEnc Portable is the popular BonkEnc packaged as a portable app, so you extract, convert, and encode your audio files just about anywhere you go. You can place it on your USB flash drive, iPod, portable hard drive or a CD and use it on any computer, without leaving any personal information behind.

The Portable BonkEnc application was designed to be a CD ripper, audio encoder and converter for various formats. It can produce MP3, MP4/M4A, Ogg Vorbis, AAC, Bonk and FLAC files. More formats are available through plug-ins.

Portable BonkEnc makes it easy to convert your audio CDs to MP3 or Ogg Vorbis files which you can use in your hardware player or with your favorite audio software. 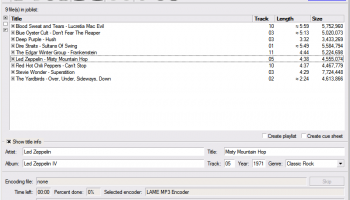