Eclipse is a multi-language software development environment comprising an integrated development environment (IDE) and an extensible plug-in system. It is written primarily in Java and can be used to develop applications in Java and, by means of the various plug-ins, in other languages as well, including C, C++, COBOL, Python, Perl, PHP, and others. The IDE is often called Eclipse ADT for Ada, Eclipse CDT for C, Eclipse JDT for Java and Eclipse PDT for PHP.

The initial codebase originated from VisualAge.[1] In its default form it is meant for Java developers, consisting of the Java Development Tools (JDT). Users can extend its capabilities by installing plug-ins written for the Eclipse software framework, such as development toolkits for other programming languages, and can write and contribute their own plug-in modules.

Released under the terms of the Eclipse Public License, Eclipse is free and open source software. 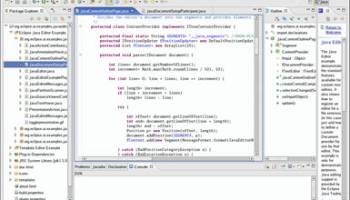