Eclipse SDK is an open source platform-independent software framework for delivering what the project calls or is known as "rich-client applications" (as opposed to "thin clients", this means the clients perform heavy-duty work on the host.

So far this framework has typically been used to develop IDEs (Integrated Development Environments), such as the highly-regarded Java IDE called Java Development Toolkit (JDT) and compiler that come as part of Eclipse SDK (and which are also used to develop Eclipse itself). However, it can be used for other types of client application as well, see the popular BitTorrent client Azureus for example.

Eclipse SDK was originally developed by IBM, but is now developed by the Eclipse Foundation, an independent not-for-profit consortium of software industry vendors. Many notable software tool vendors have embraced Eclipse as a future framework for their IDEs, among them Borland and IBM Rational. 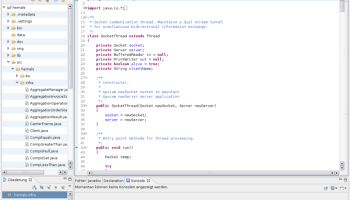