gSyncit x64 is a Microsoft Outlook add-in that allows for the synchronization of calendars, contacts, notes, and tasks between Outlook and your Google account. In addition you can now sync Outlook with Toodledo, Evernote, Dropbox and Simplenote. Google Calendar and Microsoft Outlook are among the most representative examples of this kind and the communication between them can be realized, but only if you are using some dedicated utilities that can transfer details from one application or service to another. gSyncit is one of those add-ins that users who depend on their digital agenda must have. Nonetheless, the feature set could definitely receive some improvements, especially insofar as the two way syncing is concerned.

Use gSyncit x64 to sync your Outlook data with Google, Toodledo, Dropbox, Evernote and/or Simplenote account. You then configure your phone to sync with any of these accounts using either the sync software included with your phone or other third party applications available for your mobile device. Such a tool is gSyncit, a powerful add-in for Outlook, that incorporates seamlessly with Microsoft's e-mail and calendar service and software solutions. By adding an extra entry in the application's menu, this extension will make it possible for you to keep in sync all your personal data.

gSyncit is an Outlook/Google sync which can be used in conjunction with various mobile devices allowing you to sync your Outlook data with your mobile device(s). gSyncit has the ability to sync Outlook calendars, contacts, tasks and notes with the Google "cloud" which you can then access from most major mobile/tablet devices. 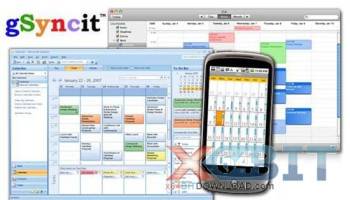