Popular software programs contain millions of line of code. Bad guys exploit flaws (vulnerabilities) in the code to deliver malware. Except when they can’t. Malwarebytes Anti-Exploit runs on a barely noticeable amount of CPU and RAM, so it is not a concern to the computer's overall performance. Since it minimizes to the taskbar, it does not interfere in the user's regular activity. Malwarebytes Anti-Exploit wraps three layers of security around popular browsers and applications, preventing exploits from compromising vulnerable code. Not an antivirus, but compatible with most antivirus, Malwarebytes Anti-Exploit is a small, specialized shield designed to protect you against one of the most dangerous forms of malware attacks. And it’s free. 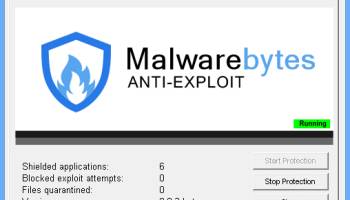