Roxio Creator 2010 also makes it easier to enjoy video on a range of mobile devices with a newly simplified and reorganized output display that enables users to quickly transfer videos that are automatically optimized for the display characteristics and playback features of their particular device. Adding to Creator 2010’s versatile video capabilities is a Web video capture feature that allows consumers to grab streaming video, such as user-generated content on YouTube®, for viewing offline on portable devices and DVD players.

The Roxio Creator 2010 interface has been redesigned for even greater clarity, with the emphasis on common, straightforward tasks and fast access to help. Functional areas have been enhanced to include new photo and music options, as well as to provide better burning and backup:

* Task-oriented design – Creator 2010’s Home page brings frequent tasks to the forefront while still enabling quick access to less-used features.
* Built-in Learning Center – users have built-in access to dozens of video tutorials and printable step-by-step instructions for quick help when needed.
* Desktop burning – files can be dragged directly onto the Roxio Burn desktop icon to immediately begin the disc burning process without first launching a separate application.
* Web radio capture – audio from streaming internet radio can be captured and automatically added to an iTunes-compatible music library for playback from a PC or a portable player such as an iPod.
* Photo slideshows – Creator 2010 lets users turn a photo collection and video clips into an engaging slideshow, complete with music and professionally-designed graphics that can be burned to DVD or shared online in a personal PhotoShow.com gallery.
* Access to Roxio CinemaNow® – direct online access to a massive selection of premium entertainment for downloading, including new movies often on the same day and date as they are available in stores.

Video
Edit movies and burn DVDs like a pro - even if you're a beginner! Capture, burn and share video, even from HD camcorders. Save web video for convenient offline playback on DVD, mobile phone or iPod®

Learn
Get to know Creator 2010 by watching it in action. Built-in video tutorials make it easy and fun to get started. Print step-by-step instructions for easy reference while you work on projects.

Audio
No matter what kind of music you're into, Creator 2010 makes it easy to rip tunes from CDs, digitize and clean up LPs and tapes, and record Internet radio or any other music playing on your PC. Create personalized mixes and compilations for any occasion.

Share
Enjoy your videos, photos and music mixes on CD, DVD, on your big screen TV, on YouTube™, or portable devices like your iPhone™ and more.

New Look
Creator's Home is the launch pad for all your video, photo, audio and burning 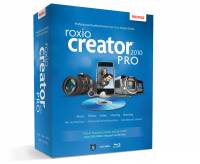