Sandboxie is a sandbox-based isolation software for 32- and 64-bit Windows NT-based operating systems. It is being developed by David Xanatos since it became open source, before that it was developed by Sophos (which acquired it from Invincea, which acquired it earlier from the original author Ronen Tzur). It creates a sandbox-like isolated operating environment in which applications can be run or installed without permanently modifying the local or mapped drive. An isolated virtual environment allows controlled testing of untrusted programs and web surfing.

Since the Open Sourcing sandboxie is being released in two flavors the classical build with a MFC based UI and as plus build that incorporates new features and an entirely new Q’t based UI. All newly added features target the plus branch but often can be utilized in the classical edition by manually editing the sandboxie.ini file.

Sandboxie Plus has a different icon, it features a sand bucket and a shovel. The biggest change however is of course the main interface of the application, which the developer calls the Sandman UI (short for Sandboxie Manager). The GUI is modern and looks user-friendly compared to the legacy version's interface. 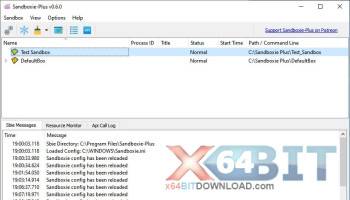