How to install Turbo Pascal on Windows x64

Turbo Pascal is a software development system that includes a compiler and an Integrated Development Environment (IDE) for the Pascal programming language running under CP/M, CP/M-86, and MS-DOS, developed by Borland under Philippe Kahn's leadership. The name Borland Pascal was generally reserved for the high-end packages (with more libraries and standard library source code) while the original cheap and widely known version was sold as Turbo Pascal. The name Borland Pascal is also used more generically for Borland's dialect of Pascal.

The IDE and editor commands conformed to the Microsoft Windows user interface guidelines instead of the classic TP user interface. The support for Windows programs required the ObjectWindows library, similar but not identical to that for the first release of Borland C++, and radically different from the earlier DOS Turbo Vision environment. Turbo Pascal was superseded for the Windows platform by Delphi; the Delphi compiler can produce console programs in addition to GUI applications, so that the use of Turbo and Borland Pascal became unnecessary. 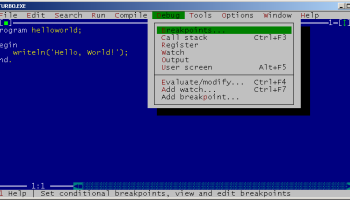