VirtualDJ is a DJ software for PC and MAC.
It is used by DJs to replace their turntables and CD players, and use digital music instead of vinyl and CDs.

In the same way that the CD players used by DJs have more options than a regular Hi-Fi CD player, VirtualDJ has more options than a simple media player like iTunes. It lets you "mix" your songs, by playing two or more tracks at the same time, adjust their relative speed so that their tempo will match, apply effects like loops etc, and crossfade from one side to the other. It also lets you scratch your songs, set and recall cues, and all the other regular features DJs expect to find to be able to mix.

VirtualDJ is plug-and-play compatible with most of the DJ controllers that exist on the market. Just plug yours and you will be ready to go. And if you want to change any of the default behavior, VirtualDJ has a powerful "VDJScript" language that will let you easily tweak any functions exactly to your liking. Same for the interface. If you want to change it, our website hosts hundreds of user-made interfaces to replace the default one, or you could easily create your own.

VirtualDJ is used by tens of millions of people every day, ranging from bedroom DJs to international superstars. It is used to play live in clubs and big stadiums, at weddings, private parties, or just to train at home. And in addition to being used live, VirtualDJ can also be used to record mixtapes, podcast, or to broadcast to Internet radios.

This version is a significant milestone in the history of VirtualDJ. Unlike the transition to v7 from v6, or to v6 from v5 etc, where we just added new significant features (like video support, 99 decks, ContentUnlimited, etc), for the v8 transition, we rewrote our software from the ground up. VirtualDJ was first started in 1996, and in the following 15 years, we kept adding more and more features, to keep pushing the limit of how technology can help you mix better. But, 15 years of layers upon layers of new code, can get quite messy, and our development speed was slowing down. That's why we spent the last 3 years to rewriting everything clean and fresh, so that for the next 20 years, new breakthrough features will keep coming at lightning speed, update after update.

But of course, version 8 is not just a clone of version 7 with a fresh engine. It also brings its share of new features and novelty. Here is a quick guide to the main new features, intended for people who are already experienced with version 7:

One new exclusive feature of VirtualDJ 8, is the new "sandbox" concept. Sandbox is a feature that helps you prepare your next mix while the audience is still listening to the previous song. When sandbox is engaged, you can jump to the end of the current track, and try to mix into the next track, hearing it only in your headphones, until you find the perfect exit-point and entry-point where you'll want to mix. You can then disengage sandbox, and calmly wait for your current track to reach the point where you're now confident you should start your mix.

The new sampler in v8 has shed all the limitations of the old v7 sampler. It can now play an unlimited number of samples simultaneously. Samples can be audio, video, or still images. Video samples can have alpha transparency. Samples can be organized by group and triggered like an instrument bank. Slots can be arranged on a grid, and have colors and icons.

The sampler is now accessed through the sideView, where you can select any bank and drag'n'drop samples directly onto the slots. The sample files themselves are found in the sampler folder in the browser. Note that you can also play any sample directly from the sampler folder, meaning that you could play as many samples as you want simultaneously, and you don't "have" to use the grid if you're more comfortable triggering samples from the list. 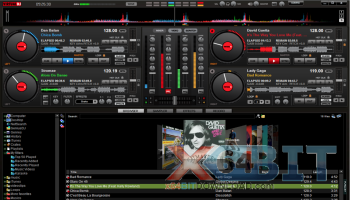