CleanMem keeps memory use in check on the system without the memory being pushed to the page file. This in turn keeps the system running smoother.

The people who will notice the biggest performance increase are ones who don't have a lot of memory installed. (More memory is always better!)

Think of it this way. Say you have a ton of hard drive space. Would you want your drive full of unneeded files? To the point where your drive is nearly full? Sure I have the space, but why would I want all that crap?
The same goes for my memory. I want to make sure the memory is being used in the best way it can. I don't want memory leaks and such using up all the memory. Lots of people feel the memory is a resource and should be used as much as possible. I agree, I just don't want the left over trash is all :-)

So how does CleanMem work?
CleanMem Works buy calling a Windows API. CleanMem doesn't change the working set of a processes. It simply asks Windows to do all the work. So Windows does the trimming, the moving and manages everything. This is why there is never any crashes of programs and any performance hit to the system. To put it short CleanMem doesn't work against the Windows memory manager, it works with it :-)

1. CleanMem doesn't work magic on your system. The best thing you could do is get more memory for your system! The goal of CleanMem is to help keep windows from needing to rely heavily on the page file. Which is located on your hard drive.

2. You will NOT notice a night & day performance increase. The users who get the best performance out of CleanMem are the users who don't have a lot of memory. I know others would yell at them and say "well just buy more memory!" Well not everyone can run out and buy memory. CleanMem will help them until they do.

3. CleanMem is snake oil! Snake oil I say!...Not. So far the only people calling CleanMem snake oil are the users who don't bother trying it. I have one "memory expert" after another tell me one thing and say the other memory people are wrong! Its a war I don't want to fight and that no one will win. The true memory experts are the programmers of Windows, the programmers! And lets face it, they are not going to find their way to my corner of the web :-)

4. CleanMem WILL NOT make your system faster. What CleanMem does, again, is help avoid the use of the page file on the hard drive, which is where your slow down comes from. There have been users including my self who have noticed a smoother system. A placebo effect perhaps? Who knows. I do know that CleanMem hurts nothing, and does help, to a point.

5. CleanMem does help with programs that have memory leaks. The memory is pushed to the system cache, not the page file. The system cache is still in memory. And a program can call back what it needs instantly. This is why there is never a hiccup in heavy 3D games as CleanMem runs. The memory that is not reclaimed is freed and allowed to be taken over after a certain amount of time. The system cache is not a bad thing! and is far better than the page file. Mainly because it has the GB speeds in memory than the MB speeds of the hard drive. 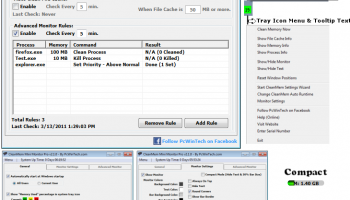