Core Temp for Windows x64 is a compact, no fuss, small footprint, yet powerful program to monitor processor temperature and other vital information.

What makes Core Temp unique is the way it works. It is capable of displaying a temperature of each individual core of every processor in your system!

All major processor manufacturers have implemented a "DTS" (Digital Thermal Sensor) in their products. The DTS provides more accurate and higher resolution temperature readings than conventional onboard thermal sensors.

This feature is supported by all recent x86 processors. Processors by Intel, AMD and VIA are supported.

Core Temp is easy to use, while also enabling a high level of customization and expandability. Core Temp provides a platform for plug-ins, which allows developers to add new features and extend its functionality.

Core Temp goes mobile!
Have you ever wished that you could keep an eye on your systems while you were out of home or the office?
If you have an Android device, now you can!

New Core Temp Gadget and Windows Media Center addon for Windows 7 and Vista.
Recently I've released a new version of the Core Temp Gadget, completely overhauled. The new version includes a graph view, listing processor load or temperature as well as memory utilization. The readings are now color coded and they are user adjustable from the Options screen. Among these improvements the gadget can be resized and the information text above the readings can be hidden if so desired. 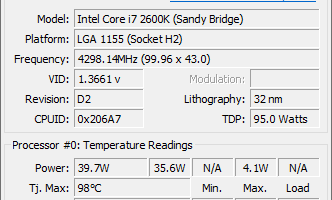