Welcome to Ghostscript for Windows x64, an interpreter for the PostScript language and for PDF.

Ghostscript for Windows x64 is a package of software that provides:

Ghostscript is written entirely in C, with special care taken to make it run properly on a wide variety of systems, including MS Windows, Apple MacOS, the wide variety of Unix and Unix-like platforms and VMS systems.

Ghostscript is a copyrighted work; it is not shareware or in the public domain.

Versions entitled GPL Ghostscript are distributed with the GNU General Public License, which allows free use, and free copying and redistribution under certain conditions (including, in some cases, commercial distribution). A supported commercial version is available from Artifex Software Inc.

Releases made prior to 2004 were part of the GNU project and were titled GNU Ghostscript; that project now maintains a fork. Versions prior to 8.54 were released first under a more restrictive license as AFPL Ghostscript.

The Ghostscript source code distribution, and the Ghostscript executable code, include the following libraries obtained from other parties: 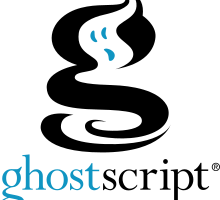