VLC x64 is a free and open source multimedia player and framework for Windows x64 that plays most multimedia files as well as DVD, Audio CD, VCD, and various streaming protocols.

VLC media player x64 nightly for Windows x64 supports partially encrypted Blu-ray discs and brings a more polished look and enhancements to the options and codecs in this flexible player. VLC media player nightly is more visually striking with a new sidebar allowing quick access to your playlist, media folders or online streams. The final version will also include a search tool so you can find missing media much more easily than before.

The most important feature in VLC media player x64 nightly however is Blu-ray support. However, for legal reasons, it will only open partially encrypted Blu-ray discs. It can also now output audio to Android and iOS devices. Note that it can also be quite unstable as this is effectively a beta release of VLC media player x64.

* Experimental support for BluRay discs:
- Menus are deactivated in this release (will come soon).
- AACS and BD+ DRM libraries and keys are not shipped, for legal reasons.
* Support for SDI capture cards and QTKit devices.
* Support for new adaptive streaming protocols, like HLS and DASH. 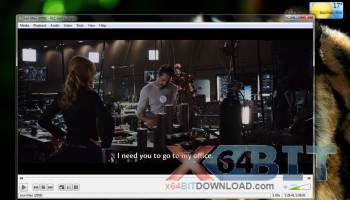