MediaCoder x64 is one of the best video encoders/decoders in the software market, and it's now offering special versions for popular devices such as the PSP.

MediaCoder PSP Edition x64 enables you to convert your favorite movies and shows to the video formats used in Playstation Portable, so that you can take them anywhere with you. The interface, just like the iPhone version, feels a bit overwhelming at the beginning, but the program in itself is quite easy to use. There's also an embedded PSP player that allows you to preview the video exactly as it will be viewed on your device.

On the downside, I found the program to be a bit slow at some points, for example when launching it or when opening the configuration menu. Other than that, MediaCoder PSP Edition works fine, just like its older brothers. 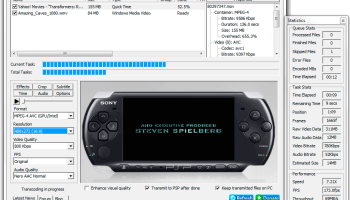