Audacity is a free, easy-to-use audio editor and recorder for Windows, Mac OS X, GNU/Linux and other operating systems. You can use Audacity to:

Audacity is free software, developed by a group of volunteers and distributed under the GNU General Public License (GPL).

Free software is not just free of cost (like "free beer"). It is free as in freedom (like "free speech"). Free software gives you the freedom to use a program, study how it works, improve it and share it with others. For more information, visit the Free Software Foundation.

Audacity supports uncompressed audio standards such as WAV and AIFF in addition to OGG and MP3 files. A full complement of basic effects such as reverb, delay, and compression are included. Virtual Studio Technology (VST), Linux Audio Developers Simple Plugin Architecture (LAPSDA), and Nyquist plug-ins also are available if you're looking to expand. Another eye-catching feature is the Beat Analyzer, which helps you peg the beats per minute of a phrase.

* Selection Toolbar: a value for the previous whole second displayed if the value was close to a whole second.
* Finding zero crossings could cause the selection to expand into white space at either side of the clip.
* Clips did not drag to another track if mouse was over a selection.
* Mixer Board: Rendering four tracks resulted in a redundant Track Strip followed by a crash.

* Exporting to WAV or AIFF led to a "Libsndfile says" error or corrupted output due to order of metadata in imported files.
* (Mac) Fixed crashes importing MP3 files on PPC machines.
* (Linux Ubuntu) .Aup files could not be associated with Audacity (they opened in the web browser instead).

* Normalize: Fixed issues where normalization could be to wrong value if applied with DC offset correction, or if applied to "read-directly" WAV and AIFF files before On-Demand completed.
* Sliding Time Scale: fixed an audible discontinuity at the beginning of the processed selection; fixed a serious quality problem on Linux 64-bit.

* including fix to prevent zooming with mouse wheel or ball scrolling the content off-screen. 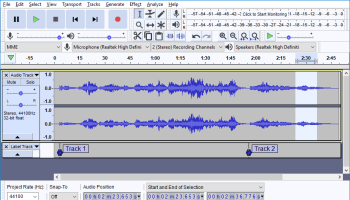