You are here: X-64-bit Download \ Audio & Multimedia \ Other \ Multimedia Builder

With MMB you can develop autorun menus, multimedia apps, or front-ends for your CD's* without having to spend months learning complex programming languages.
If you are already distributing software on CD-ROM or DVD, creating your own CD-Audio or making your Audio CD you will love this easy-to-use, intuitive software.
Create multimedia applications with graphic, text, sounds, Audio ,Video, supporting CD Audio or Mixed-mode CD's, executing applications and much more...
Apply many cool effects to your images.
MMB creates small stand-alone exe applications and has many bells & whistles you will ever need.
Create a cool looking app or small game and send it to all your friends

Many large companies realized that using MMB is much easier and faster for building their autorun presentations and menus than their in-house solution.
You may already have seen some of them in action:

* Corel Corporation uses autorun menu created in MMB on some of their recent products (for example WordPerfect Office 2002, etc.)
* 3DFX uses MMB for their installation CD's for Voodoo graphic cards (also with some easter-eggs)
* BMG Entertainment uses whole presentations made in MMB on some of their PC enhanced audio CD's
* and more...

With MMB you can create

MMB is legacy product that has reached its end of the life. 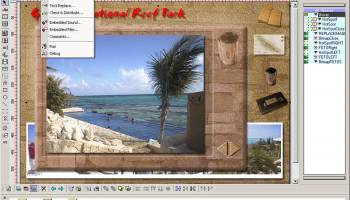