Microsoft is officially rolling out Windows 11, the next major version of its operating system (after announcing it back in June). It adds a revamped Start Menu, better multi-monitor and touchscreen support, tighter integration with Xbox Game Pass, and a renewed push for the Windows Store. It includes tools to help you with multitasking, deepening, creating and connecting - everything related to simplicity and intuitiveness.

The Start Menu Is in the Middle Now
The biggest visual difference in Windows 11 is how the Start button on the taskbar is centered as opposed to being on the far left of the screen. There is an option to move it back to the corner if you’re not willing to retrain your muscle memory, but Microsoft is keen to mimic the MacOS and Chrome OS look.

A More Cohesive Interface
For years, Windows has been a bit of a fractured mess, with newer, sleek user interface elements mixing with old. Windows 11 finally updates many features that have looked out of place in the past, and that means you'll see new designs more frequently.

The Windows Store Is Now the Microsoft Store (and It Has Android Apps)
Android apps will be coming to Windows 11 (though not right away) in Microsoft Store, via the Amazon Appstore. (There were a couple of ways to access Android apps on Windows 10, including if you had a Samsung Galaxy phone, but this will make it native.) This is something Windows users have been waiting for for years, and marks another move toward the merging of mobile and laptop devices.

Better virtual desktop support
Windows 11 will let you set up virtual desktops in a way that's more similar to Macs, toggling between multiple desktops at once for personal, work, school or gaming use. In Windows 10, this was harder to set up and use.

Easier transition from monitor to laptop
The new OS includes features called Snap Groups and Snap Layouts -- collections of the apps you're using at once that sit in the taskbar, and can come up or be minimized at the same time for easier task switching. They also let you plug and unplug from a monitor more easily, without losing where your open windows are located.

Microsoft Teams added to the Taskbar
Teams is getting a facelift and will be integrated directly into the Windows 11 taskbar, making it easier to access (and a bit more like Apple's FaceTime). You'll be able to access teams from Windows, Mac, Android or iOS.

Widgets Are Back
While they've been around for a while, including in a recent Windows 10 update, you can now access widgets directly from the Taskbar and personalize them to see whatever you'd like.


Ensure the PC you want to install Windows 11:

Matches your current language: You'll need to choose the same language when you install Windows 11. 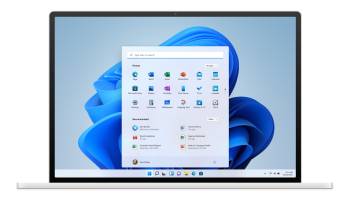