Csound is a sound and music synthesis system, providing facilities for composition and performance over a wide range of platforms. It is not restricted to any style of music, having been used for many years in the creation of classical, pop, techno, ambient, experimental, and (of course) computer music, as well as music for film and television.

Csound 5 is the current version and its software architecture has been greatly redesigned, presenting a number of significant advantages over Csound 4 for both the user and for developers wishing to call Csound from their own software. Csound 5 supports the most popular operating systems in use today, including Linux, Mac OS X, and Windows. Csound 5 will also probably compile and run on other Unix-based systems. (Success has been reported with NetBSD). Mac OS 7 through 9 was supported through Csound version 5.08.

Csound is now free software released under the GNU Lesser General Public License. It is developed by a community of volunteers and new contributors are welcome. Csound was originally developed by Barry L. Vercoe at the Music and Cognition Group of the M.I.T. Media Laboratory, with partial support from the System Development Foundation and from the National Science Foundation Grant #IRI-8704665. 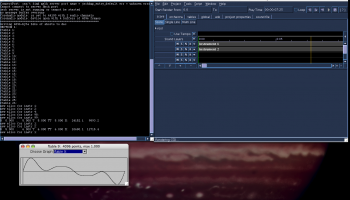