primesieve x64 uses the segmented sieve of Eratosthenes with wheel factorization, this algorithm has a complexity of operations and uses space.

Additionally primesieve uses Tomás Oliveira e Silva's cache-friendly bucket list algorithm if needed [5]. This algorithm is relatively new it has been devised by Tomás Oliveira e Silva in 2001 in order to speed up the segmented sieve of Eratosthenes for prime numbers past 32 bits. The idea is to store the sieving primes into lists of buckets with each list being associated with a segment. A list of sieving primes related to a specific segment contains only those primes that have multiple occurrence(s) in that segment. Whilst sieving a segment only the primes of the related list are used for sieving and each prime is reassigned to the list responsible for its next multiple when processed. The benefit of this approach is that it is now possible to use segments (i.e. sieve arrays) smaller than without deteriorating efficiency, this is important as only small segments that fit into the CPU's L1 or L2 cache provide fast memory access.

primesieve x64 is written entirely in C++ and does not depend on external libraries [6], it compiles with every standard compliant C++ compiler. Its speed is mainly due to the segmentation of the sieve of Eratosthenes which prevents cache misses when crossing off multiples in the sieve array and the use of a bit array instead of the more widely used byte (boolean) array. These are the optimizations I use in my implementation: 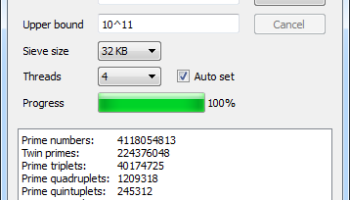