LightWave x64 is the backbone of efficient 3D pipelines. Groundbreaking. Innovative. Proprietary. Whether you work alone or play well with others, LightWave is integrative and immersive.

Features:
Instancing:
· Instancing lets you create mass duplication of objects in a scene, with very little overhead. Previously, you would simply run out of memory. Now, with the ability to have huge ‘virtual’ polygon counts, artists can populate their scenes with incredible detail, and yet retain reasonable render times.

· While instances can be thought of as clones of the original source objects, they don't need to look identical. They can be randomly scaled, positioned, rotated and even surfaced completely different from the source. This means you can use instancing for any number of uses.

Flocking:
· Use the Flock controller, which calculates crowd avoidance of neighbors, target alignment, and cohesive attractions, to create realistic natural motions, with ease.These are the three elements of any flocking system.

Fracture:
· This new Modeler tool was designed specifically to compliment Bullet dynamics in LightWave Layout. It allows the artist to pre-fracture objects ready for destruction.

· There are a number of different methods and associated settings to fine tune the look of the pieces as they are broken up. You also have the ability to create an Endomorph of the resulting fracture, which means you can animate the explosion, with or without using dynamics.

· Weight maps can also be applied to the source object to control the density of where the fracturing takes place, making Fracture a flexible tool for creating breaking objects in LightWave.

· LightWave features the Bullet dynamics engine directly in Layout so that it can be used with the new Fracture tool in Modeler to create compelling physics-based animation. Things like collapsing buildings, explosions, and even natural placement of items in a random pattern, would otherwise be difficult to do by hand.

Interchange Tools:
· The GoZ implementation in LightWave Layout and Modeler is robust and fully featured. It allows you to exchange model data, along with all the associated texture maps. The Modeler implementation even lets you use ZBrush for sculpting Endomorphs for things like facial morphs.

Render Buffer Enhancements:
· Saving and viewing the various buffers produced by the render engine to make up an image, is now more powerful and much easier in LightWave.

Python Scripting:
· Python is an industry standard programming language prevalent in most CG pipelines. The inclusion of Python in LightWave allows even further integration of LightWave into studio pipelines, as those familiar with Python can quickly begin writing tools for LightWave.

FiberFX Enhancements:
· FiberFX now has a new volume rendering mode. “Stroke” is the original shading method for volumetric rendering. When set to “Solid,” the user can apply shading and material like any normal surface. This lets you create very complex looking fibers, easily, and perform parametric cylinder rendering of the fibers. 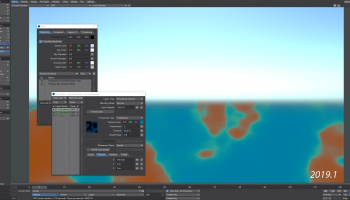