Panotour Pro 64-bit revolutionizes the creation of interactive virtual tours by freeing you from programming tasks. Everything is done in a few clicks using the software’s intuitive interface.

You can add and create interactions between images of any size (up to 360° x 180°) and almost all graphic formats (JPG, PNG, PSD/PSB, KRO, TIFF and RAW files from most cameras).

The Panotour Pro 64-bit interface is customizable. You can enable or disable certain components, move them or even turn them into independent windows.

Panotour Pro is the only software that allows you to edit interactions in gigapixel panoramas, visually and without having to resort to programming. Specifically, you can add hotspots and create any type of interaction. You can also link giant images to 360° virtual tours. For example: for a city tour, take the visitor to the giant panorama in which he can zoom in and see details of the buildings, and allow him to click on the streets or buildings to enter into immersive virtual tours.

With Panotour Pro, easily integrate photos, images and animations into your virtual tours. Embed them into the content (in a hanging frame on the wall for example) and have them appear with a 3D effect. 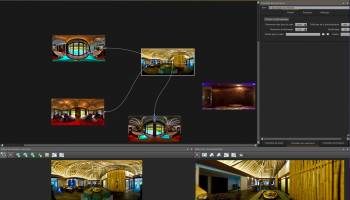